Mt Shasta is a powerful spiritual sacred site on the planet. Sacred to Native Americans who perform many ceremonies on the mountain and surrounding areas, some tribes regarding it as ‘Heaven’. Mt Shasta is also referred to as the last remnant mountain of Lemuria, an ancient continent home to an advanced spiritual civilization based on heart centered living.

Thousands of pilgrims travel here every year to embrace the spiritual frequencies available. Known as both the Root Chakra and the Crown Chakra, we will be working with both elements for our transformation – Embodying Spirituality.

Mt Shasta is a mountain that attracts all for unique reasons. From our experience with retreats here, all leave with a beautiful and unique transformation. Many are propelled onto their spiritual paths. Many feel their hearts expanded with inner love. Many are rekindled with strengthened Spiritual Connection. Each experience is absolutely unique and we work intuitively to surrender to what Mt Shasta, Great Spirit and Consciousness has to teach us.

Snowcapped Mt. Shasta is located in the upper regions of northern California in the Shasta Trinity National Forest.  It is a is a massive dominant stratum white giant standing 14,162 foot volcano situated in the largest zone of volcanoes in the world called the Pacific Ring of Fire.

Mount Shasta is in a section of this ring called the Cascade Range, which begins where the Sierra Nevadas end and extends about 700 miles from northern California through Oregon and Washington into southern British Columbia.  These volcanoes range in elevations from 9,500 feet to a towering height of more than 14,000 feet. Mount Shasta is the second tallest volcano in this range.

Towering above the Cascade foothills, Shasta is surrounded by five glaciers that hold it in place.  This sacred mountain emits such a strong energy pattern that satellite photos show an atmospheric hole over its peak similar to Sedona, Arizona.

Because of the strong geophysical forces within the mountain, there are steam vents, hot and cold springs, purification sites, electrical centers and caverns that have been used as power spots by the indigenous natives for hundreds of years. There are many types of phenomena that occur on and near Mt Shasta as this mountain exhibits strong frequencies that create light shows.

Mount Shasta can be considered as one of the most sacred places on this planet. The mountain is a mystic power source for this planet. It is known as an incarnation of the Great Central Sun of this universe. It is a focus for angels, spirit-guides, intergalactic ships, masters from the Light Realm, and the home of the survivors of Ancient Lemuria, which sank under the waves of the Pacific Ocean a little over 12,000 years ago.

Mount Shasta is said to be embraced in a gigantic, etheric purple pyramid whose capstone reaches far beyond this planet into space, and connects us intergalactically to the Confederation of Planets for this sector of the Milky Way Galaxy. This pyramid is also created as an inverted version of itself, reaching far down to the very core of the Earth. You can call Mount Shasta the entry point of the Light-Grids of this planet, where most of the energy comes first from the galactic and universal core before it is disseminated to other mountains and into the grids. Most mountaintops, especially tall mountains, are Beacons of Light, feeding the light-grids of this planet.

Strange lights and sounds are often seen or heard on the mountain. Lenticular clouds, shadows and outstanding sunsets add to the mystical aura of the mountain.

Over the last seventy years numerous travelers have reported encounters with Higher Dimension beings who live beneath and around the holy mountain of Mt. Shasta California.

UFO sightings have also become so commonplace there that there are books published with numerous photographs of craft so large they even dwarf the mountain itself.  Vision quests, ceremonies and camping expeditions have all seen, heard and felt the powerful vortex that is Mt. Shasta.

Native Americans: Mt. Shasta is a boundary for four Native peoples – , the Shasta, Modoc, Ajumawi/Atsuwegi, and Wintu.   The Shasta believe that the Great Spirit first created the mountain, by pushing down ice and snow through a hole from heaven, then using the mountain to step onto the earth. The Modoc teach that the Great Spirit lived on Mt. Shasta after creation. His daughter fell from the mountain and was raised by grizzly bears and married one of their clan. Today, the tribes honor the mountain with rituals and sweat lodges and are actively involved with protecting the sacred springs on the Mountain.

In conversation with Shasta residents, you will find that Mt. Shasta is often believed to be a cosmic vortex and one of the Seven Sacred Mountains of the World, a UFO landing spot, the entry point into a fifth dimension. It is fascinating to hear the many stories of close encounters with metaphysical beings, angels and extra terrestrials as well as personal transformation stories and miracles attributed to the sacred power of the mountain.

The Ascended Master St. Germain, Archangel Michael, and others are reportedly seen on the slopes of Mt. Shasta.  Ascended Masters and Angels are spiritually advanced beings who radiate the “luminous essence of divine love” and assist human evolution.

Digital cameras now show, invisible to most human eyes, mysterious pictures of “orbs”, incandescent globes moving in the air and converging at sacred ceremonies as well as mysterious luminous angels or ghost figures.

Mt Shasta has a spectacular wilderness.  Geologically speaking, it is a strato volcano, with four cones buried atop one another.  Shastina is the most evident of these cones and forms a second peak. It is believed that Mt Shasta embodies the head of a huge geographical dove etheric energy grid anchoring the keys for the center of the Earth’s Merk-a-bah that connects with a universal grid of incoming energetics.

This sacred mountain has given many people centuries of access to its energy centers.  The pristine meadows, graceful slopes and isolated beauty of the mountain continues to provide a haven for those who seek sanctuary from the world that lies at its feet.

Mount Shasta is the locational access point to “All That Is” and connection with your higher self. It is a place where you are bathed in knowingness and powerfully nurtured by divine support. The “I AM” presence.  It delivers the realization and frequency of oneness and your connection to everything.

Many know Mt. Shasta as the Crown chakra. Shasta is a Multidimensional Galactic portal for the Star Nations. There are numerous reports of other worldly activity as this portal is utilised to assist with the shift in consciousness. Shasta acts as a channel pouring the new consciousness onto the planet.

Mt Shasta is also known to many as the Root Chakra of the planet. This energy center is considered primal and ‘base.’ Here is where the universal life force is considered to gather before it becomes life – and is representative of the geysers which rush to the surface with energy the same way that kundalini energy is thought to rush to the crown or pineal gland was awakened from the root chakra. (Source: Waking Times) 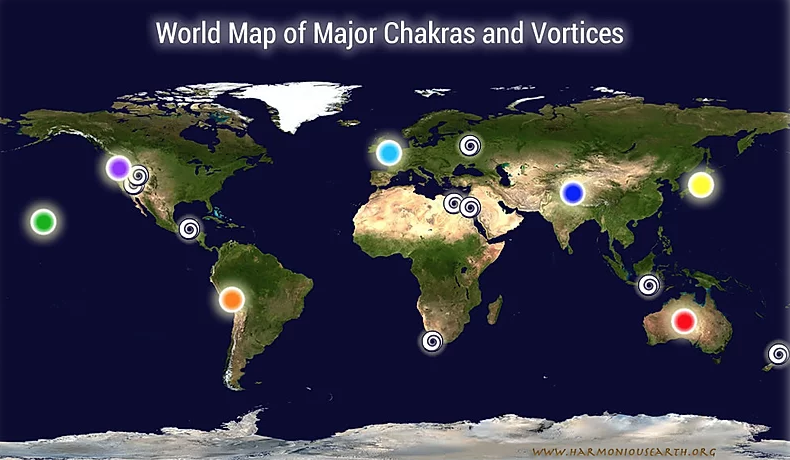 Shasta is also often associated with the “The Violet Flame” or Saint Germain, the purifying violet energy which transmutes denser energies and reignites the flame of your divine purpose. The symbol and energy are also represented in Shasta’s energy of being the meeting place of the high council, the place where humans step into their roles as ascended masters and physicalize Christ Consciousness on Earth.

Mount Shasta co-creates an energetic Vesica Pisces with the Sedona Vortex. Together, they are connected by a line of energy and their radiating electromagnetic fields combine, immersing the geographic locations between them in a resonance of 33 cycles per second.